In an exclusive interview with One FC Fighter and Dynasty MMA Family Member Nathan “Pretty Boy” Ng – we get an inside look at what is going on in the world of the newlywed professional MMA fighter and strength conditioning coach, and his thoughts on his upcoming fight on Nov 13th 2015 at One FC Pride of Lions in Singapore.

“I don’t think about whether I match up well with other opponents because fighting is fighting. Well-established strikers have been beaten on the feet by less established strikers and Brazilian jiu-jitsu black belts have been submitted by blue belts. Styles make fights, and one won’t ever know what can happen until the bell rings. Until then, all of it is speculative and fluff.”

Proud to be representing Chinese MMA

With a goal to promote Asian mixed martial arts (MMA), Nathan Ng held high hopes that his ONE Fighting Championship (ONE FC) debut could be made in Hong Kong, the birthplace of his parents.

“I had hoped my first ONE FC match would be in Hong Kong, the birthplace of my parents and most of my family tree. That is important to me as I wished to pay homage to my hometown.”

Nonetheless, the 29-year-old San Francisco native says that his ultimate goal is to promote Chinese MMA.

“As with anything I am pursuing, one of my big goals is to promote Asian MMA, especially Chinese MMA. I hope to use MMA to give a greater voice for the Chinese. I am preparing all of my skills with my team at 10th Planet Jiu Jitsu and GSD. It is best to be ready for anything in a fight. It is MMA, and I won’t say my striking or my ground game is carrying me. At the end of the day, it comes down to the fighter who is most mentally and physically prepared.”

Nathan Ng’s fighting team has a name that means much more to him than just the series of letters. As they got more serious about MMA training and fighting, Ng and his coach decided to christen their team “GSD” – for “Garage Self Defense.” It’s meant to be a reminder about where they came from and even what they continue to be – not to mention the boost from watching “Street Fighter.”

“(We had) the motivation of being like Ryu and Ken, traveling the world to fight fighters from around the world,” Ng told MMAjunkie. “Our team, GSD, stands for ‘Garage Self Defense,’ because most of our training is done out of a garage from our teenage days at my parents’ house.”

Even though growing up in California he was most interested in basketball, Ng is now ready to fight on an international stage, again. It will continue a long journey that started in a rough neighborhood in San Francisco and continued with his garage training sessions. Ng says his neighborhood in San Francisco while growing up was a rough one. At least until his family was able to move to a nicer part of the area when he was in middle school.

As the product of hard-working parents, he tried to adopt the same attribute.

“My father worked in the tech industry, and my mother in accounting. They have always been hard-working and have instilled in me those values by leading from example. My father is always so full of life and passion, and that’s what I have gotten from him. My mother is a workaholic, and I get that from her.”

He was a basketball junkie, not a fighting junkie. He and his friends would often play until the street got dark with images of Michael Jordan in their brains. But then he and a friend started watching Street Fighter. In those shows of the series about two characters and their fighting careers, they found the motivation to try fighting and learn something new. That led to time spent in the garage that continues to be part of their psyche as a part of their team name. Ng’s partner in that effort continues to be his cornerman and coach. They would eventually take that passion to a professional level.

Ng first learned in high school that he could have another career on his hands. He was scouted by an acting and modeling agency, so he visited with no existing interest in doing that kind of work. He signed up with the group to give it a try. After a few years, Ng moved on to another agency and has been involved in a “few commercials and shorts, as well as a ton of photo shoots.” Meanwhile, he was still pursuing in martial arts and MMA interest.

He has recently put his career as an actor and model on hold, and began working as a strength conditioning coach:

“My career as an actor and a model in Los Angeles was pretty exciting. I got to do some fun projects and work with some really talented people. Los Angeles is where all the fish that outgrew their small ponds ended up. I’ve been a strength and conditioning coach for quite awhile now, and I get to apply many different techniques to the athletes I coach. Strength and conditioning is like BJJ — you can never learn enough, and there are certainly more schools of thought than one can count. Football players are my favorite to coach, and I got to coach a very high level Oakland Raider.”

On his recent marriage:

“Getting married has definitely changed my perspective as a fighter and as a man. Most people don’t realize how selfish they are until they are in a relationship where the well-being of the other person is a priority. You learn very quickly that you need to compromise and change lots of habits you may have had as a single person. But, like they all say, it’s totally, totally worth it. My wife is very supportive in my training, and I try to better manage my time. You know how they say that the grass is greener on the side you water? You learn that your marriage is a far more important lawn than your fighting career. You also learn that as a fighter, you bring that into every area of your life. You fight for your wife, you fight for your marriage, and you fight for having it better for the two of you.”

On his training methodology: 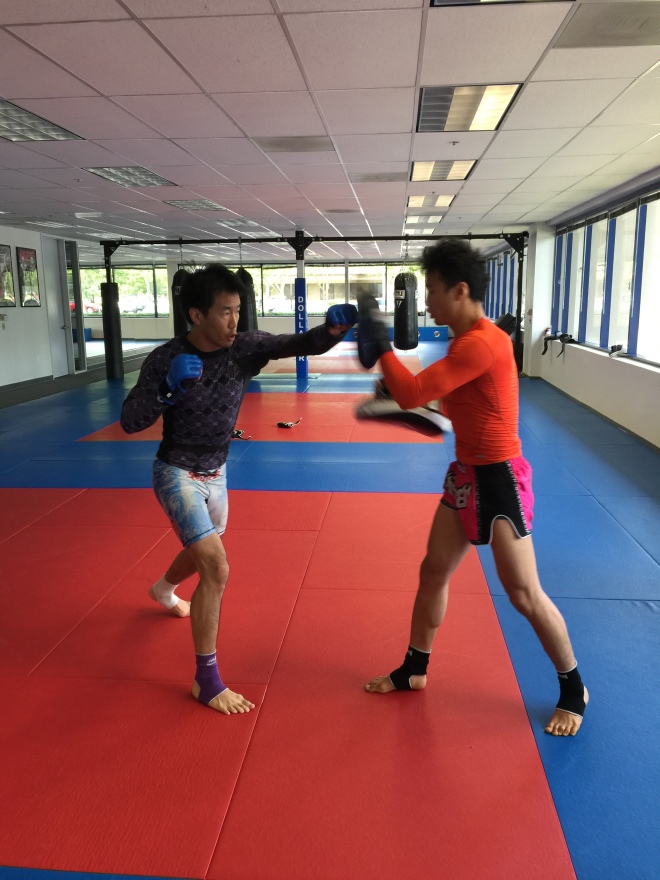 “Training is training, and each session is about fixing weaknesses in my game. You must improve on every aspect of your game, while minimizing any regression in the process. If you want to work on your De La Riva guard, you put more emphasis on it in training, and you slowly lose some of your top game. You have to keep practicing and practicing, like Bruce Lee said, to accept what is useful and discard what isn’t. Training means increasing your toolbox, and sharpening your existing tools.”

On his next opponent at One FC Pride of Lions:

“My opponent is Li Kai Wen, and we’re fighting on November 13th in Singapore. My mind is totally focused on him, who is a very seasoned freestyle wrestler. Wrestlers are typically ranked in the top of each division, and for good reason. They are athletic, relentless, and they have an incredible work ethic. I saw his highlights and he is very tough and explosive. He has quick hands, and, like all wrestlers, hits extremely hard. I haven’t developed a game plan for him because frankly, wrestlers are impossibly hard to defeat. In MMA, you can’t predict an outcome for a fight. You can only train your best, and you won’t know what will happen until the bell rings. We’ll see how my opponent will respond to my 10th Planet Jiu Jitsu. My Coach Denny “300” Prokopos will be preparing me for the ground game, and I’ll be working at the GSD headquarters for all of my striking.”

Dynasty Clothing MMA is proud to have Nathan Ng with us as an integral part of the Dynasty Family. Do you want to support Nathan Ng? Use his code NATHAN10 to get 10% off your order at DynastyClothingStore.com – and a portion of the proceeds will go directly in supporting his MMA journey. We wish him and his coaches a great big victory this Friday November 13th at One FC: Pride of Lions!

Portions of this article first appeared on Yahoo Sports and MMA Junkie.